I have recently been thinking about this old Joni Mitchell song. I tried to retire last year and succeeded in stopping clinical practice after 30 great years of hand surgery. For better or worse, I ended up immediately running against 7 other people (including 2 other doctors) for an open Georgia State Senate seat. The seat became vacant due to the sitting Senator’s run for Dr. Tom Price’s congressional seat. With a lot of help from doctors and others, including many hand and other orthopaedic surgeons, I was elected and sworn in June 2 of 2017.

Although I had accumulated plenty of leadership and business experience, I soon learned that a logical approach to problems didn’t work very well at the Capitol. I was appalled by the process, the behavior and the anger directed at me from one or the other side regardless of how I voted.

As one of two women in my party’s caucus, the room was a little intimidating at first and I was amazed as I watched perfectly good healthcare legislation killed by committee chairs in the two chambers who had a deeply adversarial relationship.

I soon began to realize that I had just left the world’s best job for a new career that was missing many of the elements that made hand surgery so satisfying. I did my share of whining about our EMR, excessive regulations, ER call and difficult patients during my hand surgery career, but as I got further into my new job, I found myself missing my patients, colleagues and staff. I loved doing surgery and getting to know my patients. I enjoyed getting generally good results and getting to work as part of an efficient team every single day. I had forgotten the luxury of a positive work environment and the respect and trust most people hold for their surgeon!

A patient that stands out in my mind is a young rheumatoid who also has scleroderma. She had lots of involvement of her feet and hands. She had already had multiple surgeries on her feet when she was referred to me, and over several years I did multiple surgeries on both her hands. Once she was able to walk and her hand function started to improve, she began to paint.
She and I got to know each other very well and she has become a successful artist. I own several of her paintings and see her at various gallery events. Her hands are far from normal, but she has gained enough function to pursue her dream. What could be more rewarding?

I hope that all my hand surgery friends will reflect for a moment on what a huge honor and privilege it is to be a hand surgeon. The combination of intellectual challenge, productive work and positive relationships make hand surgery hard to beat. For all who are feeling beat up, burned out and frustrated, take some time off, spend more time with your kids and pursue things that make you feel better, but don’t give up too soon. Retirement may be different than you expect! 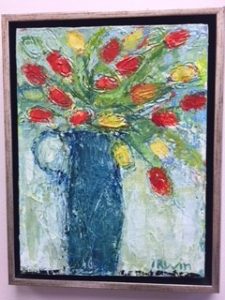 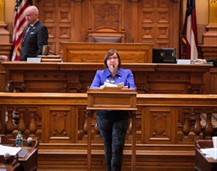 Kay Kirkpatrick is currently a Georgia state Senator, retired from private practice in Atlanta, Georgia with Resurgens Orthopaedics. She is also involved with patient safety initiatives and teaching TeamSTEPPS. When she is not at work, she likes to do dog therapy with her golden doodle, play golf, and watch Stanford football. She also enjoys spending time at her country place in northwest Alabama.

What is the purpose of retirement?